From the Edge to Beyond: Highly Anticipated Ship Debuts April 2022

The dynamic and decorated captain will usher in a new era for the new-luxury brand, sailing a ship brought to life by a dream team of modern lifestyle icons including multi-award-winning British designer Kelly Hoppen CBE; celebrated American designer Nate Berkus; the culinary gifts of Michelin-starred chef and restaurateur Daniel Boulud; and featuring wellness experiences and products from goop CEO and founder Gwyneth Paltrow, the brand’s Well-Being Advisor.

For Captain Kate, the seed to be a captain was planted following a cruise the then-12-year-old McCue took with her family. She told her father that she wanted to be a cruise director when she grew up. His advice to her was that she could do anything she wanted, including captaining the ship.

Since that time Captain Kate has been a pioneer and trailblazer, breaking the gender barrier in 2015 when Lutoff-Perlo named her to be the first -- and still only -- American female to captain a major cruise ship - Celebrity Summit. She moved to Celebrity Equinox before being appointed to helm the exquisite Celebrity Edge® in September 2019. On March 8, 2020, McCue further cemented her place in the history books when she captained the history-making, barrier-breaking sailing on Celebrity Edge that comprised a cruise ship’s first-ever all-female bridge and officer team.

Captain Kate also led the Celebrity fleet – and the industry – back into operation when, on June 26, 2021, Celebrity Edge became the first cruise ship to sail with guests from a U.S. port in more than a year due to the global coronavirus pandemic.

“This is a day that I’ve been waiting for since we made the first cut of steel on our beautiful Celebrity Beyond. Captain Kate has transcended what it means to be a captain as a voice and example of inclusivity, diversity, and change,” said Lutoff-Perlo.  “She constantly thinks about how she can go above and beyond, mirroring the exceptional design and imagination of the ship she will captain. I’m beyond excited to see her take our guests to locations that will open their eyes to the beauty of the world around them and experience travel on a new-luxury ship without comparison.”

Since taking on the mantle of captain, McCue has inspired others to shoot for the stars and encouraged people from all walks of life to follow their dreams. The endearing and charismatic McCue has also become a social media celebrity, amassing nearly 3.5 million followers across TikTok, Instagram and YouTube by humanizing the profile of captain and sharing behind the scenes looks at seafaring life.

“To be the ‘take out’ captain for a new vessel is an honor for any captain and it is an absolute dream  come true for me. I always say that if you see it, you can be it and I hope that Celebrity Beyond sails as an inspiration for all to see past convention in pursuit of any goal in life,“ said Captain Kate McCue. “I’m forever grateful to Lisa for entrusting this labor of love to me to captain. The thoughtfulness and imagination she put into this ship is only matched by her forward thinking to move the industry beyond what it is now and see what it should be.”

Celebrity Beyond will not only hold the title of the largest ship in the fleet, but the distinction as the brand’s most luxurious vessel.

Celebrity Beyond stands at 17 decks high and 21 meters longer than her innovative predecessors Celebrity Edge (2018) and Celebrity Apex (2020). Every element of Celebrity Beyond’s look and feel has been carefully curated with newly imagined spaces and expanded versions of the brand’s popular signature spaces, including:

She will then offer a variety of Mediterranean journeys including nine-night Italian Riviera and France itineraries and 10-night Greek Isles itineraries through early October, when she then heads to the Caribbean. Voyages are on sale now. For more information on all Celebrity Beyond inaugural 2022-2023 season sailings, visit https://www.celebritycruises.com/cruise-ships/celebrity-beyond.

Editor’s Note: Media can stay up-to-date on all Celebrity Cruises news at celebritycruisespresscenter.com

Celebrity Cruises’ iconic “X” is the mark of a fleet of 14 award-winning ships redefining luxury cruise travel with cool, contemporary design and accommodation; dining, spa, and entertainment experiences for modern tastes; and culturally rich and diverse destination experiences, all complemented by warm, personalized service. Celebrity has pioneered many industry firsts at sea, including the first use of solar panels on a cruise ship; the first to eliminate the use of plastic water bottles; the first American female captain of a cruise ship; the first-ever all-female bridge and officer team sailing; the first West African woman to work on the bridge of a cruise ship; and one of the first legal same-sex weddings performed at sea. Driven by wanderlust and a passion for opening the world, Celebrity journeys to all seven continents, visiting nearly 300 destinations in more than 70 countries. Celebrity Cruises is one of five cruise brands operated by global cruise company Royal Caribbean Group. (NYSE: RCL).

Celebrity Cruises is applying the recommendations of the Healthy Sail Panel of public health and scientific experts to provide a safer and healthier cruise vacation on all of its sailings. Health and safety protocols, regional travel restrictions and clearance to visit ports of call, are subject to change based on ongoing evaluation, public health standards, and government requirements. 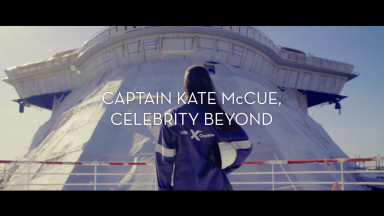 Captain Kate McCue to Take the Helm of Celebrity Beyond℠ 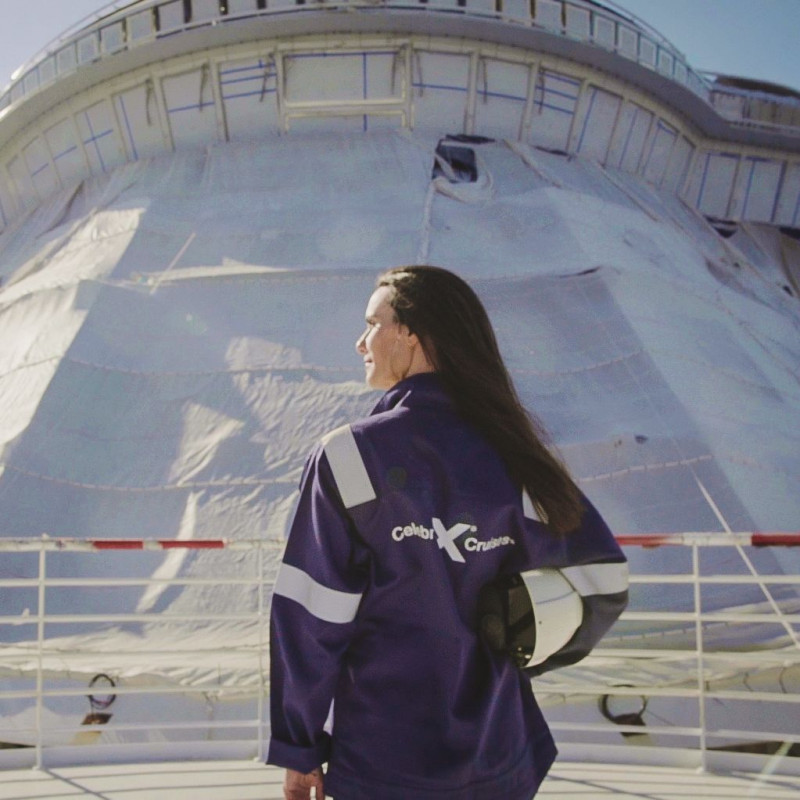 Captain Kate will take the helm of Celebrity Beyond, the... company’s third ship in its industry-transforming Edge Series debuting in spring 2022.
Show Less