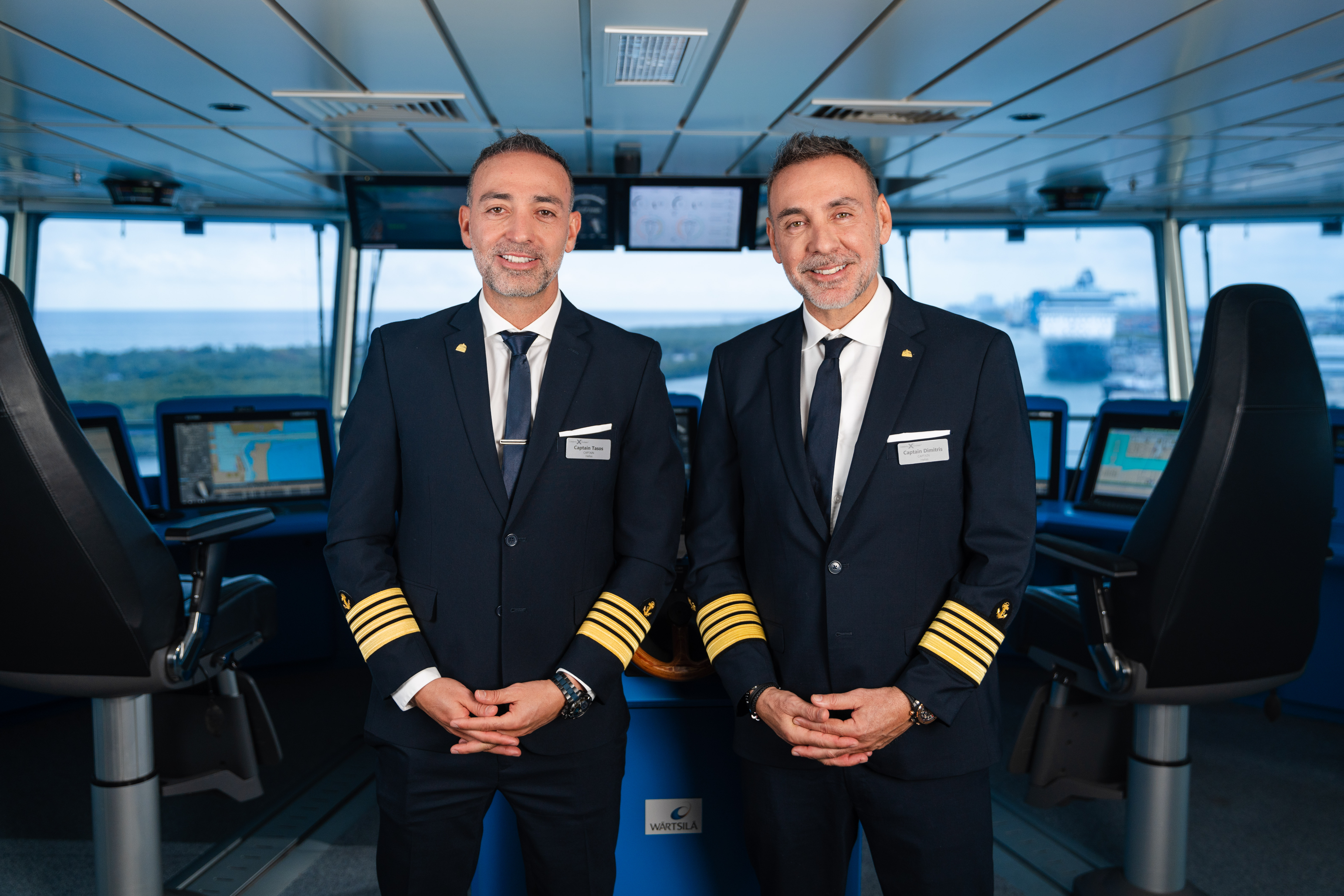 The accomplished maritime brothers will usher in a new era for the cruise line, taking the helm of the brand’s newest resort at sea, which has been brought to life by a team of modern lifestyle icons including multi-award-winning British designer Kelly Hoppen CBE; celebrated American designer Nate Berkus and Michelin starred chef and restaurateur Daniel Boulud.

“Captain Dimitrios and Captain Tasos are our star-powered siblings, a maritime dream team. They have given so much to the Celebrity family over the years that we are like a second family,” said Lutoff-Perlo. “Seeing their emotional reaction to this appointment and understanding what it means to share this pinnacle of their career together was something I didn’t expect and will never forget.

This ship represents a monumental milestone for our brand, taking our innovative outward-facing design further than ever, and creating a whole new class of relaxed luxury resorts at sea. I am so proud to leave her in the hands of these expert mariners.”

Captain Dimitrios has dedicated his entire maritime career, spanning more than three decades, to Celebrity Cruises, having started as an Apprentice Officer onboard Celebrity’s very first vessel, the Horizon, in 1990. Today, he reaches the very pinnacle of the industry, being named take-out captain of this trailblazing ship. Born in Piraeus, port of Athens, Greece, Captain Dimitrios graduated from the Merchant Maritime Academy of Syros-Athens at the top of his class, and has held his Master’s license since 2001. He has sailed aboard every different class of ship in Celebrity’s fleet, and was also part of the start up teams for Celebrity MillenniumⓇ, Celebrity InfinityⓇ, Celebrity SilhouetteⓇ and Celebrity ApexⓇ, the latter of which he was also the take out Captain.

Captain Tasos grew up watching his older brother Dimitrios making a career on cruise ships, and realized he wanted to follow in his footsteps. After also graduating from the Merchant Marine College, he joined Celebrity Cruises in 1998, and over his more than 20-year career with the brand, has been involved in the opening of Celebrity SummitⓇ, Celebrity SolsticeⓇ, Celebrity EquinoxⓇ and Celebrity ReflectionⓇ. Most recently, he has served as captain of Celebrity EdgeⓇ, the very first of Celebrity’s award-winning Edge SeriesⓇ, which launched in 2018.

The brothers will alternate their time on Celebrity Ascent in a three-months on-and-off rotation.

“Today is a momentous day,” said Captain Dimitrios Katetzis. “I am proud that after a more than 30- year career working exclusively with Celebrity Cruises, I can play a part in their history by captaining this fourth in the series - yet one of a kind - Edge Series ship. Nearly 35 years after Celebrity Cruises was founded in Greece, they will have not one, but two Greek captains taking the helm of their newest vessel in 2023 and I am honored for my brother and I to take this role, together. I am so proud for my family and proud of my brother. We look forward to welcoming everyone on board Celebrity Ascent this winter.”

“Receiving this distinction with my brother and as part of the Celebrity Cruises family is an incredible honor for me and an emotional one, too,” said Captain Tasos Kafetzis. Together, my brother and I share a love of the ocean, and a love for this company and our guests. To share a special moment together like this is something I could have only dreamed of. I can’t wait to sail away on this incredible ship with our guests onboard and my brother in my heart.”

Aboard Celebrity Ascent, travelers will enjoy signature experiences found exclusively onboard a Celebrity Cruises Edge Series ship, including: outward-facing Resort Deck with cabanas; infinity-edge plunge pools and two-story Martini-shaped hot tubs and an elevated running track; Infinite Veranda staterooms that transform into open-air verandas with the touch of a button; legendary two-story Edge Villa staterooms with direct access to the exclusive suite-only The Retreat Sun Deck; the iconic Magic Carpet - the world's first cantilevered bar that sits on the edge of the cruise ship 13 stories above sea level; a sprawling Nate Berkus-designed Sunset Bar and more than 30 food and beverage options, including the high-tech, fully-immersive Le Petit Chef Dinner Experience (currently growing in NYC and LA but only available at sea on Celebrity Cruises) and the Eden Restaurant which will continue to offer its three-story floor-to-ceiling windows, inventive, mixology-focused cocktails, an action-packed open kitchen, and unforgettable globally-inspired dishes from around the world.

Editor’s Note: Media can stay up to date on all Celebrity Cruises news at celebritycruisespresscenter.com

About Celebrity Cruises:
Celebrity Cruises’ iconic “X” is the mark of a fleet of 14 award-winning ships redefining luxury cruise travel with cool, contemporary design and accommodation; dining, spa, and entertainment experiences for modern tastes; and culturally rich and diverse destination experiences, all complemented by warm, personalized service.  Celebrity has pioneered many industry firsts at sea, including the first use of solar panels on a cruise ship; the first to eliminate the use of plastic water bottles; the first American female captain of a cruise ship; the first-ever all-female bridge and officer team sailing; the first West African woman to work on the bridge of a cruise ship;  and one of the first legal same-sex weddings performed at sea. Driven by wanderlust and a passion for opening the world, Celebrity journeys to all seven continents, visiting nearly 300 destinations in more than 70 countries.  Celebrity Cruises is one of five cruise brands operated by global cruise company Royal Caribbean Group. (NYSE:  RCL). 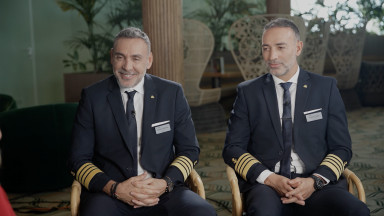 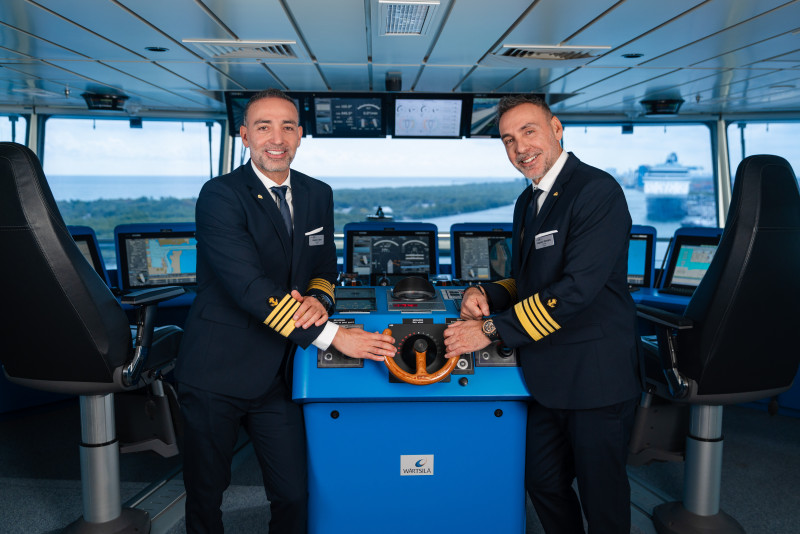 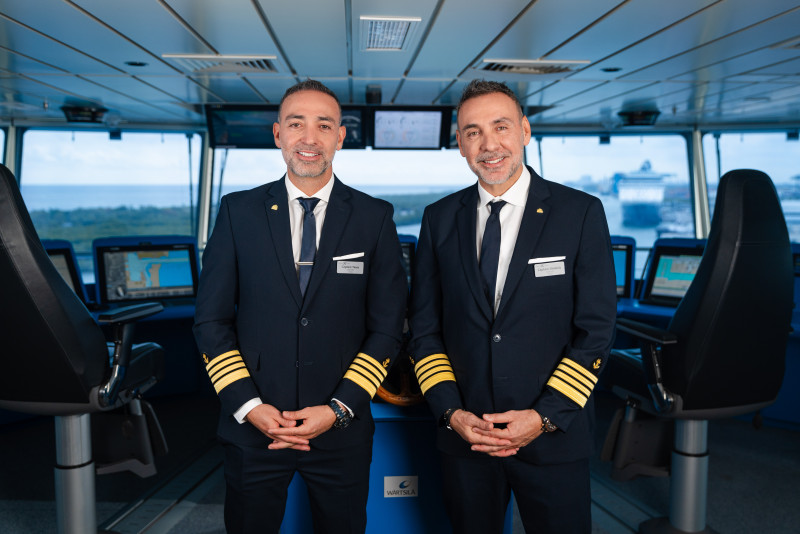 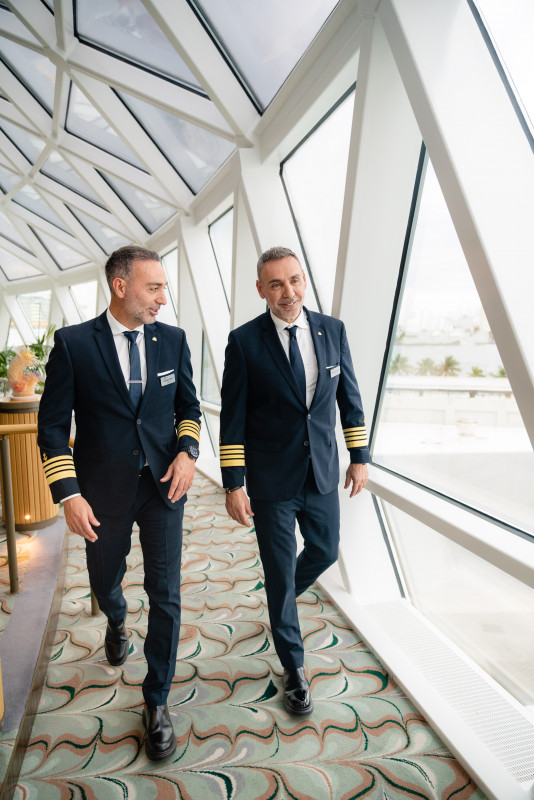